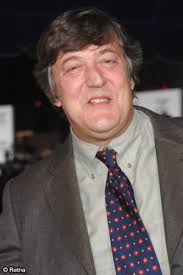 The trailers weren’t exactly inspiring, but I thought I had better listen to Fry’s English Delight on BBC R4 this morning (“Stephen Fry explores the highways and byways of the English language: Speaking Proper”).
It was pretty dire. Harry Campbell put finger to keyboard before I did. He called it

a farrago of urban myths, old wives' tales and
"experts", mostly self-appointed, who proceed to discredit themselves as soon as they open their mouths. Never more so, you may imagine, than when the subject is phonetics. Scarcely a true word spoken at any point, with the usual confusion of the concepts of accent, dialect, voice tone, diction.

There was Joan Bakewell explaining how upper-class speakers don’t move their mouths and that in order to lose her northern accent she had to learn to do the same. And Deborah Hecht, the American dialect coach, explaining that to sound RP Americans have to learn to use more lip action and more muscularity. No one commented on the fact that they cannot both be right.
There was an elocution teacher from Rochdale who told us, in an unreconstructed Lancashire accent, about the importance of pronouncing all the letters correctly and enunciating the beginnings and ends of words. In her case this meant making all final voiceless plosives ejective.
My colleague Sophie Scott from the UCL Institute of Cognitive Neuroscience, who spoke good sense about the so-called foreign accent syndrome, must feel ashamed to have been associated with such a ragbag of a programme.
If you feel strong enough to listen to it yourself, it’s here for the next seven days.
Posted by John Wells at 15:20