what’s con\/sidered to be | one of the ˈfinest ˈwalks in \Britain.

…which led me to reflect on an ambiguity in the meaning of the English fall-rise tone. 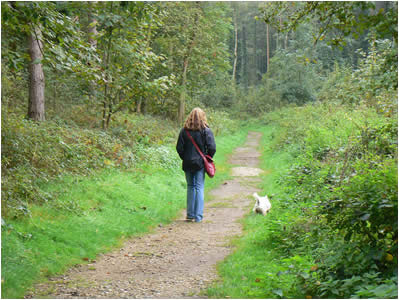 The voiceover actor, overemphasizing things as actors tend to, caused me at first to misinterpret the intonational meaning as ‘considered to be one of the finest (but actually not one of the finest)’. That is, I took the tone to be an “implicational” fall-rise (my English Intonation – an Introduction, §2.6–7).
I realized immediately that that didn’t make pragmatic sense. What was intended was merely a dependent fall-rise (§2.20), indicating only that we have not yet reached the end of the sentence, that there is more to come.
If I had had to read the voiceover script, I think I would have removed the ambiguity by saying just

what’s considered to be one of the ˈfinest ˈwalks in \Britain.

— with no accent at all on considered. But it would also have been unambiguous to use a non-nuclear accent on considered:

what’s conˈsidered to be (ˈ)one of the ˈfinest ˈwalks in \Britain.

— though, depending on speech rate, this might produce an uncomfortably long intonational phrase.
It may be the case that the falling-rising pitch movement tends to be wider in an implicational fall-rise than in a dependent one (or for that matter than in a “tentative” one). That would explain why the actor’s animatedness led to my initial misinterpretation of his meaning: he produced a fall-rise so wide that its primary meaning would be the implicational one. I would suspect that the wider the pitch range, the more likely a fall-rise is to be interpreted as implicational, and the narrower, the more likely to be interpreted as dependent. But it might conceivably also depend on the absolute pitches used.
Does anyone know of any evidence showing whether or not pitch and meaning in the fall-rise are linked in this way?
Posted by John Wells at 08:45