The latest quarterly update of the online OED covers the alphabetical range Rh to rococoesque.

John Simpson provides his usual insightful commentary exploring some of the new entries. Ben Zimmer, too, has seized the moment to write about what he calls the “fascinatingly complex entry for a seemingly simple word: rock, used as a verb”.

You will forgive me if I draw attention instead to a coinage of my own.

In 1968, inspired by Labov’s innovative approach to data collection in New York’s department stores, I spent an afternoon in Southampton stopping people in the street and asking them about preferred flavours of ice cream. My covert aim was to elicit the word vanilla and see whether people on the streets of this town pronounced it with a final plain schwa ə, as in most kinds of English, or with an r-coloured ‘schwar’ ɚ. As I expected, I encountered a number of cases of the latter. (I was of course careful to exclude instances where the word was followed by a vowel at the beginning of the next word, the position where it would be normal for English people to use intrusive r.)

The reason for this sudden burst of activity was that I was being pressed for a contribution, any contribution, to the annual Progress Report put out by the Phonetics Laboratory of my Department. I wrote up my findings over the next two days: four-page paperette, job done.

At the time there was no satisfactory word available to describe the kind of pronunciation used in places such as Southampton, in which r is preserved in all positions, as against the more general type of English English in which historical r is lost except immediately before a vowel (as in RP, where farmer is ˈfɑːmə). Some American writers used the term r-ful, but this not only lacked the dignity appropriate for technical terminology but was also susceptible (in England, at least) to very inconvenient confusion with the word awful.

So I invented the word rhotic, with derivatives such as rhoticity, non-rhotic and, for accents like Southampton that additionally impose r-colouring in cases where it is historically unjustified, hyperrhotic. 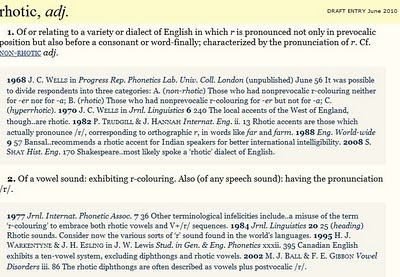 Since then my coinage has not only been widely taken up but has also had a second meaning added, ‘exhibiting r-colouring’. This has also been made into a noun ‘rhotic’, meaning any kind of r-sound. Here’s Wikipedia.

Ladefoged and Maddieson’s book The Sounds of the World’s Languages (Blackwell, 1996), has a chapter entitled Rhotics.
The new OED formulation does not recognize the noun.

Some people did not like my coinage. But it’s too late now. You’re stuck with it.
Posted by John Wells at 08:56