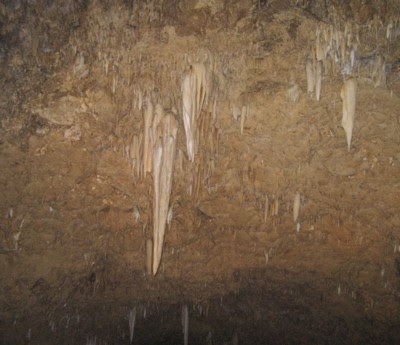 When in Barbados recently I learnt a new word, speleothem ˈspiːliəʊθem. It refers to any underground rock formation, more precisely to “secondary mineral deposits formed from water in caves”. Examples include stalactites and stalagmites. According to the OED, this word was coined (from Greek) as recently as 1952.

On the island we visited an impressive series of limestone caverns, Harrison’s Cave, which has only recently been developed as a tourist attraction. You are driven around underground in a “tram” (wagons pulled by a tractor) through tunnels and caverns full of stalactites, stalagmites, and other, um, speleothems. Somewhat reminiscent of Postojna in Slovenia, it’s well worth a visit. 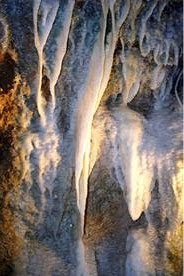 I was struck by the fact that our guide, presumably a native Barbadian, pronounced stəˈlæktaɪt and stəˈlæɡmaɪt (or with stæ-). These are what I take to be the American stressings of stalactite and stalagmite, in contrast to the British ˈstæləktaɪt and ˈstæləɡmaɪt. Given the generally British orientation of Barbadian English, I would have expected rather to hear initial (or perhaps final) stress.
I don’t think I have ever heard penultimate stress in these words in BrE. Nor, as far as I recall, have I heard a strong vowel in the penultimate syllable (ˈstælæktaɪt, ˈstælæɡmaɪt), despite the fact that the OED allows only for the strong vowel.

In fact the OED pronunciation entries are rather odd: they imply that BrE can have either stressing and always a strong medial vowel, both of which claims seem to me to be at best dubious. 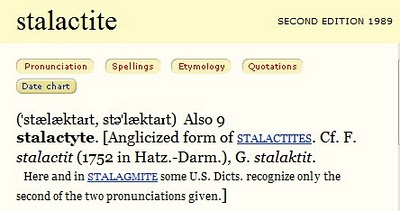 For what it’s worth, initial stress is what Chomsky and Halle’s SPE rules would predict for stalactite #stælækt+īt# and stalagmite #stælægm+īt#. Their Main Stress Rule imposes stress on the final heavy syllable, then the Alternating Stress Rule converts this to antepenultimate, preserving the strength of the final vowel. The American, penultimate, stress pattern, as used by our Bajan guide, would necessitate marking the pronunciation of these words as exceptional.

To remember which is which, stalactite or stalagmite, I regret to say that at school we learned the mnemonic "first the tights come down, then the mites will grow up".
Posted by John Wells at 08:45