David Marsh, the Guardian style guide editor (and, I’m proud to say, my former student), had a nice piece in the paper a few days ago about umlauts. 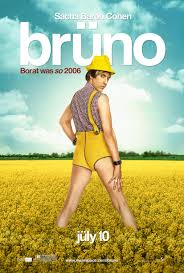 Sacha Baron Cohen’s latest avatar, after Ali G and Borat, is called Brüno (sic). Although he is supposedly Austrian, and therefore German-speaking, spelling this name with ü is linguistically entirely un-German.

"There is absolutely no precedent for the name Bruno to be written with an umlaut, and to do so contravenes a general rule of German phonetics"

The two dots above the vowel letter here are purely decorative. David refers us to the entertaining Wikipedia article on metal umlaut.
This article lists a whole lot of rock bands and the like that have ornamented their names in the same way: Mötley Crüe, Motörhead, Maxïmo Park and many others. There’s also the American punk rock band Hüsker Dü, whose name comes from the Danish/Norwegian phrase “do you remember?”, correctly written Husker Du? (but that way it wouldn’t look so excitinɡ).

But why would Brüno want to project a heavy metal image? That’s not the sort of character he is at all. Confüsing.
Posted by John Wells at 13:45