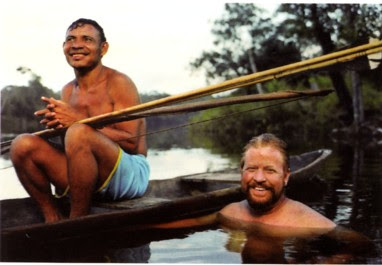 I have been reading Dan Everett’s fascinating account of life and language in the Amazonian jungle, Don’t sleep, there are snakes. He went as a missionary to the Pirahã, to learn their language with the intention of translating the New Testament into it. Rather than his converting them, however, it was they who ultimately undermined his Christian beliefs. He has now written a number of learned articles about their language, as well as this excellent popular account of the years he spent living with them.
The Pirahã language, according to Everett, has no numerals, no way of counting, and no quantifiers. More dramatically for Chomsky’s ideas about linguistic universals, he claims it has no grammatical recursion. He makes an excellent case for this claim, as far as I can judge, but Chomsky’s reaction was reportedly to denounce him as a charlatan.
Phonetically, Pirahã is remarkable for having very few phonemes: just eight consonants for men, /p b t k g ʔ s h/, and three vowels, /i a o/. Women have one consonant fewer, since they replace /s/ by /h/. There is some striking allophonic variation: /b/ is [m] when initial and a trill [ʙ] between the vowels i and o; /g/ is [n] when initial, and between i and o can be a kind of linguolabial lateral (the ExtIPA symbol for this is l̼).
There’s a sound file of the spoken language here.
In Pirahã orthography it has been decided to use the letter x to represent the glottal stop, which is of frequent occurrence in the language. Unfortunately on the page of phonetic explanation the printers of Everett’s book have got the IPA symbol wrong: