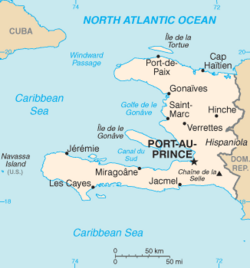 The terrible events in Haiti mean that both the name of the country and the name of its capital, Port-au-Prince, are repeatedly in the news.
Dictionaries agree in recommending an anglicized pronunciation of Haiti itself, namely ˈheɪti. This has not stopped occasional reporters offering variants such as ˈhaɪti and even hɑːˈiːti (and LPD, CPD etc duly report these). Many educated English people will be aware of the French pronunciation aiti, and possibly even of the French spelling Haïti. Although French is one of the two official languages of Haiti, the other one, and the language of most of the inhabitants, is Haitian Creole (a dialect of French Creole). The Creole spelling of the name of the country is Ayiti.
I think the Oxford BBC Guide to Pronunciation is on solid ground when it states firmly that in English the country is called hay-ti /ˈheɪti/ and labels this the “established anglicization”. The adjective Haitian is correspondingly given as ˈheɪʃən. (The French haïtien is aisjɛ̃.)

Similarly with the name of the city that now lies in ruins. OBGP, LPD and CPD all record the anglicization of Port-au-Prince as ˌpɔːt əʊ ˈprɪn(t)s (or the corresponding AmE ˌpɔːrt̬oʊ-). OBGP, however, while recognizing that as the established anglicization, “also common in Haiti”, comments further that

They are probably not aware that in standard French the name is actually pronounced pɔʀopʀɛ̃ːs. There is normally no liaison in the case of the word Port: compare Port Arthur pɔʀaʀtyʀ, Port-Royal pɔʀʀwajal, and Port-sur-Saône pɔʀsyʀsoːn.

In Haitian Creole, however, the name of the city is Pòtoprens, presumably pɔtopxɛ̃s.

I’ve put another video up on YouTube, about the pronunciation preference polls in LPD.
Posted by John Wells at 11:07