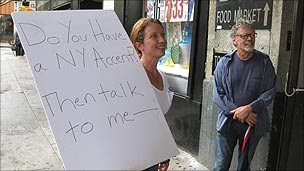 Thanks to Ludwig Tan for a link to this BBC news article about one Heather Quinlan, who is “on a quest to record [the] full variety [of the New York accent] for posterity”.

I have to say that in my opinion displaying a sign reading “Do you have a NY Accent? Then talk to me” might produce a rather unbalanced sample of speakers. But I suppose it’s better than nothing.

Despite its publication on a British website, the article betrays an American point of view. Declaring that New Yorkers pronounce “Wa-ta” not “Water” is pretty meaningless for an English readership. But then declaring that they say “Awe-ful” not “Awful”, and calling this “’A’ broadened” is pretty meaningless from every point of view.
(The latter assertion is presumably about the THOUGHT vowel, which in NYC can be an opening diphthong, almost [oə], rather than the [ɔ, ɒ, ɑ] monophthong that we hear from other Americans. But for a British readership a “broadened” A would be taken as referring to the backed and lengthened vowel of BATH in RP etc, bɑːθ as against northern English baθ or American bæ(ː)θ, bɛəθ — a quite different matter.)

Fortunately the author of the article consulted Bill Labov, who introduced some scientific objectivity to the discussion.

The embedded clip, a compilation of (presumably) New Yorkers saying this and that, starts with a young lady who refers to them as niˈjɔrkɚz. No one comments on the apparent contradiction between this rhotic pronunciation and the assertion that New Yorkers drop r. (As we know, rhoticity in NYC is actually variable: some rs are dropped, some aren’t. It partly depends on the speaker’s socioeconomic status, their level of education, and the degree of formality. See Labov’s Social stratification of English in New York City.)

"A young person growing up in a college-educated household might, for example, complete the 'r' pronunciation even in his everyday speech," says Prof Labov.

Americans who know nothing about phonetics can nevertheless readily identify a New York accent. The same is not generally true of the British, to whom New Yorkers just sound American.