did I hear you aright?

If you hear a word spoken, but then want to write it down, you may be in some uncertainty how to spell it.

At least in English, that is. If we had a thoroughly transparent spelling system, you might think, it wouldn’t be such a problem.

I remember some years ago when I was working as a pronunciation consultant on a dictionary project there was a young lexicographer who suggested that we ought to add the missing word apeth, since it was in general use in expressions such as ‘a daft apeth’. (She may have thought that it literally meant some kind of baby monkey.) We had to tell her, gently, that the established spelling of this word is ha’p’orth, or in full halfpennyworth, with the pronunciation ˈheɪpəθ, and that it refers to the British predecimal coinage, superseded before she was born. (Embarrassingly for her, her misapprehension also made it clear that she came from a social background that was not confident about which words are said with h and which not. We assured her it didn’t make an ‘apeth’ of difference.)

But it’s also clear that if you hear an unfamiliar word spoken you may not hear it in exactly the same way as the person who said it intended. That could lead to spelling it wrong (or differently) even in the most perfectly phonemic orthography.

The feck in feckless is, according to the OED, “apparently aphetic < effeck, variant of EFFECT n.”. Rather than ɪˈfekt, someone must have heard effect just as fek. They then spelt it correspondingly as feck, which subsequently was adopted by everyone in feckless.

I suspect there was a similar process in the development of flimsy from film(s) + -y (which the OED strangely labels an ‘onomatopoeic’ formation). In fact film is regularly pronounced flɪm in Jamaican Creole (as well as ˈfɪləm in Irish English, which is a different matter).

There is a tour guide in Montserrat who leads hikes into the rain forest. He is very knowledgeable about the local plants and animals, and particularly the birds. He has a Facebook page on which he regularly posts pictures of interesting things seen along the hiking trails.

Here’s something he posted a few days ago. 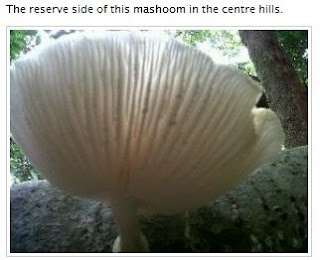 I’ve been on several hikes that he led, so I can confirm his skill and ability. He certainly knows the scientific terms fungus, fungi, and could probably tell you the full Latin name of the species here illustrated. So it’s interesting that he spells mushroom as mashoom. (“Reserve” is obviously meant to be “reverse”.)

It’s possible that this is just a joke, consciously reflecting the local pronunciation of the word. Or it might be that he really thinks that the word is ˈmæʃʊm, and spells it accordingly.

Actually, Montserratians don’t eat fungi. No restaurant will offer you a mushroom omelette, and you can’t buy mushrooms in the supermarket. Their word for a mushroom or toadstool is jumbie parasol, literally ‘ghost umbrella’. So mushroom, for a Montserratian, is presumably a word heard only from expats and visitors to the island. This could account for our guide’s uncertainty how to spell it.

The local STRUT vowel is typically back and rounded: we could represent it narrowly as ɔ̈. You can see that the AmE, and particularly the BrE, STRUT vowel might well be heard as the local TRAP vowel (= something rather more central than cardinal a). And you might well overlook the r in ʃr.