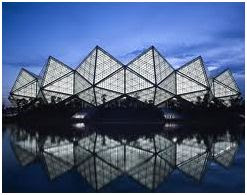 With the Eurovision Song Contest being held in the capital of Azerbaijan, we had ample opportunity last weekend to hear how people pronounced the name Baku.

What the British TV and radio presenters actually said was usually ˈbækuː.

If the account of Azeri (Azerbaijani) in Wikipedia is to be believed, native words in that language do not have k, which appears only in borrowings “from Russian or French”. The letter k generally corresponds rather to a palatal plosive c. In Azeri Baku is actually spelt Bakı, with a Turkish-style dotless i at the end denoting a close unrounded back vowel, and (according to Wikipedia) is pronounced correspondingly as bɑˈcɯ.

In English, I guess Americans would usually still go for bɑːˈkuː. I wonder what Brits in the oil business who have dealings with Azerbaijan say? Probably they too, like the TV presenters, prefer ˈbækuː, and that’s what I ought to give in LPD as the British anglicized form.

Unlike ordinary Turkish, the related Azeri has two open vowels: not only a back ɑ but also a front æ. Before the breakup of the Soviet Union, when Azeri was still written in the Cyrillic alphabet, this vowel required an extra non-Russian letter. The one chosen was visually like a schwa, Әә, and this has been carried over into the Latin-letter script used nowadays, as Əə (blog, 15 August 2006).

On a different issue, I wrote on Monday about the ˈɡlæsiəz or (compressed) ˈɡlæsjəz we’d seen and walked on. Our tour guides both on the coach trip and on the cruise were of course north American, so they called them ˈɡleɪʃɚz. It was interesting to observe our all-Brit group hesitating between our own usual pronunciation and the different model put in front of us by our authoritative guides.