The Council of the IPA is in the throes of preparing a new on-line version of the IPA Chart. By this I do not mean they are revising any of the symbols or their definitions: it is more a matter of designing the display, and in particular of selecting a suitable font for the on-line display of the Chart.

In a sense the choice of font is trivial. As long as the Chart is available in HTML form, with the symbols assigned their appropriate Unicode encodings, it is a simple matter for the user to choose the font to use for displaying it, just as with any kind of plain-text (non-graphic) web page.

Nevertheless, this does seem to be a suitable moment to revisit the shape of one particular symbol, namely that for the voiced alveolar lateral fricative, which in our usual font for this blog (= Segoe UI or Lucida Grande) looks like this: ɮ.

So if you forgive me I’ll recycle part of my blog for 3 Nov 2006, when I ventilated this issue.

The problem is that the shape ɮ is not exactly in accordance with the official decision made by the IPA Council when the symbol was first adopted, in 1938, which reads as follows (m.f. 61, p.15).

Translated from the phonetically transcribed French, it reads as follows:

The proposal to replace ɮ by [the second symbol shown] is therefore approved. We think nevertheless that the form proposed by Chatterji can be employed without disadvantage by those who prefer a symbol less remote from the old ɮ.

Chatterji’s proposal was a compromise between the ʒ-shaped right-hand side of the ‘old’ symbol and the straight side of the ‘new’. This compromise shape is the form that Daniel Jones adopted for the symbol in the 1949 Principles booklet (p. 11, also p. 50):

Except as graphics (above), I can display neither Chatterji’s compromise nor the form approved in 1938 — because they are not represented in the fonts available to our computers. Remarkably, this formal decision by the IPA seems to have been somehow forgotten or overlooked as we moved from hot metal typography to software fonts.

I do not recall any decision either at the 1989 Kiel Convention of the IPA or elsewhere to change back to the older shape. But the IPA Handbook presents the symbol as an “L-Ezh ligature”, and our current Chart shows the form ɮ. Unicode calls it LATIN SMALL LETTER LEZH (U+026E). All available computer phonetic fonts show the same ɮ shape.

Ah well, I suppose this is only a question of mere glyph variants. And it’s probably too late now to do anything about it even if we wanted to. 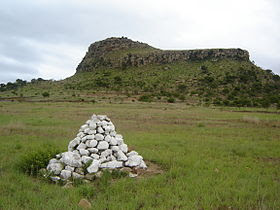 By the way, the Unicode book also repeats the Principles assertion that ɮ is “dhl” in Zulu orthography. But Zulu has had a spelling reform, and (as rightly recognized in the IPA Handbook) the current spelling is “dl”. The same applies to the related language siSwati. The surname of the Swazi royal family is Dlamini ɮaˈmiːni, and in Zulu ‘to eat’ (with the infinitive prefix uku-) is ukudla uˈɠúːɮa. The site of the famous battle that used to be spelt Isandhlwana is now written Isandlwana. It’s still pronounced [ísanˈdɮwáːna]. (After /n/ you get a laterally released affricate rather than the lateral fricative used in other positions.)