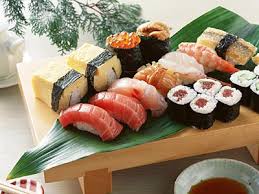 Masaki Taniguchi tells me he was on a train in Japan recently when he got talking, mostly in English, to a Swiss lady who was touring Japan with her family. She was from Lausanne and her first language was French. She mentioned that she loved sushi.
Sushi comes in many varieties. While westerners usually like most of them, not everyone is enthusiastic about those that include uncooked fish.
Masaki said to the Swiss lady “Do you like raw fish?”.
Her unexpected reply was “Oh, you speak German?”.
It so happens that the (standard) German roher Fisch ʁoːɐ fɪʃ sounds very similar to the English raw fish ɹɔː fɪʃ. (Don’t ask me how it would be pronounced in Swiss German.)

This reminds me of a more complicated multilingual example, probably apocryphal. A visiting Frenchman in Enɡland went to buy an ice cream. The vendor asked him what size he wanted. The Frenchman understood the question but answered in French, “à deux boules” (with two scoops) a dø bul. Fortunately communication was not impaired, despite the interlocutors’ ignorance of one another’s language, because the English vendor heard it as “a double” ə dʌbɫ.
Posted by John Wells at 23:44