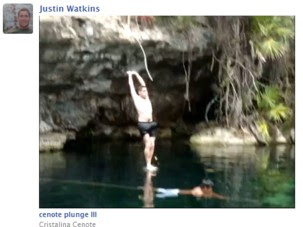 Intrigued by Justin Watkins’s posting on Facebook of a video clip of himself jumping into a pool under the headline “cenote plunge”, I looked up the word cenote. Where does one most conveniently look up a presumed technical term these days? In Wikipedia of course, where I duly found

A cenote (pronounced in Mexican Spanish [seˈnoˌte], in Iberian Spanish [θeˈnoˌte] and in English [səˈnəʊˌteɪ] …) is a sinkhole with exposed rocky edges containing groundwater.

When you find an error in Wikipedia you’re supposed to just quietly correct it, not publicize it. But I thought it worth while drawing attention to this over-use of the secondary stress mark by some would-be phoneticians.
Not every unreduced vowel has secondary stress! Particularly not in languages that, like Spanish, do not go in for vowel reduction. The Spanish pronunciation should most definitely be shown as seˈnote, θeˈnote, and the English, in my view, as səˈnəʊteɪ.
Few if any Spanish words have more than one stress (the claimed exceptions are usually adverbs in -mente). And none have post-tonic secondary stress.
In English we have post-tonic secondary stress in compounds such as ˈgrandˌfather and ˈwashing maˌchine. But not (in my view) in words such as ˈeducate (not “ˈeduˌcate”) or ceˈnote.
Posted by John Wells at 23:44