Would you happen to know how Towton (as in the Battle of Towton, the largest battle on English soil) is pronounced? I am not sure whether this would be ˈtəʊtn or ˈtaʊtn.

I didn’t know, but I knew someone who would: the BBC Pronunciation Unit (blog, 13 April).

Martha [Figueroa-Clark] and I were reading your blog yesterday and were especially grateful for your kind (and informed!) words in our defence. You are quite right, we have been recommending the pronunciation for L'Aquila as LACK-will-uh since 1971 and with a special note to draw attention to first syllable stress. We did all we could to disseminate the information but with the resources we have and being an advisory service, we cannot enforce pronunciations, as you very well know.
As for Towton, we have an entry from 2007, which gives the pronunciation TOW-tuhn (-ow as in now). This is the pronunciation given to us by Dr Buckberry of Bradford University's Towton Mass Grave Project.

So there you have it, Edward: it’s ˈtaʊtn. 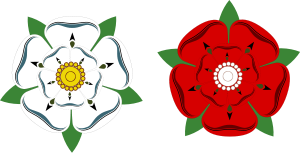 The Battle of Towton (1461), fought between the Lancastrians and the Yorkists in the Wars of the Roses, was indeed the bloodiest in English history. It is reported that over 80,000 people were killed there, which would represent about 1% of the entire English population at the time.
* * *
This blog will now take an extended post-Easter break. Next entry: 24 May.
Posted by John Wells at 23:43