cockney then and now 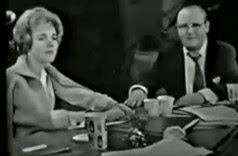 Thanks to Amy Stoller for pointing us to a video clip of Julie Andrews being coached for her Cockney accent for the film of My Fair Lady, 1956. (The dialect coach is American…). As Amy says, “it was clearly staged for the cameras to publicize the show, but is a find nonetheless”.
That kind of stage Cockney was, I think, always a little too good to be true. But in any case that sort of Cockney, Cockney of the kind I describe in my Accents of English book, Cockney as researched by the likes of Eva Sivertsen, is disappearing from the traditional area within earshot of Bow Bells in Cheapside as a result of demographic changes. Its speakers have largely moved out to outer boroughs and to new towns in Essex and Hertfordshire.

Yesterday’s London Evening Standard (now a freesheet and much improved on its earlier, paid, version) carried an article on the subject.

As its traditional speakers emigrate to Essex and Hertfordshire, the 650-year-old accent is dying off in London, to be replaced by multicultural London English, heavily influenced by West Indian patois, Bangladeshi and remnants of old cockney. The dialect won't die off altogether. It will survive in the descendants of those Home Counties émigrés. You can hear it happening today: teenagers in Essex speak like Henry Cooper and Barbara Windsor; in Lambeth, they are more likely to sound like Ali G.

The article is written on a popular style but based on serious academic research by Paul Kerswill and his team working on “Multicultural London English”. (Blog, 16 Nov 2006 and 25 Mar 2008)

Cockney in the East End is now transforming itself into multicultural London English, a new, melting-pot mixture of all those people living here who learned English as a second language. Ever since the 1960s, these areas of London have become home to immigrants from the West Indies, the Indian subcontinent and many other places, from South America and Africa to Central Asia and the Far East. Some of these people spoke the kind of English typical of their original countries. Others couldn't speak English, so children were speaking their native language at home but were learning English at school.
“This means that children were no longer learning their English dialect from local cockney speakers but from older teenagers, who themselves had developed their English in the linguistic melting pot. Out of all this, the new English which we call multicultural London English emerged, and this is the sound of inner-city London we hear today.”
This hybrid, known in slang terms as “Jafaican”, is a mixture of cockney, Bangladeshi and West Indian. Its leading fictional exponent is Ali G; a genuine user is Dizzee Rascal, the 24-year-old rapper, born in Bow, and a supporter of the cockney football team, West Ham.

The newspaper article chooses, perhaps wisely, not to attempt any description of the phonetic changes involved in the switch from the old Cockney to the new mLE, but entertains us instead with a Jafaican glossary.

I have to say, though, that young Londoners I encounter don’t seem to use most of these expressions, at least when speaking to me: only ɑːks for ask and ˈɪnɪʔ innit as the universal question tag.
Posted by John Wells at 08:26