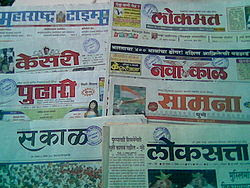 Thanks to Giridhar Rao for alerting me to this: a news website called DNA, based in Mumbai, India, reports that

94 per cent of the students in primary schools across the country cannot recognise the English alphabets.


Er, come again?
Which English alphabets would that be? When I last checked, we only use one alphabet, the one comprising the letters A to Z, the one also known as Latin script.
The writer can hardly be talking about Indian children being ignorant of the International Phonetic Alphabet or of alphabetic shorthand systems.
No, by an “alphabet” the writer of this report means what in core standard English is called a “letter”. The children can’t recognize the letters of the English (Latin) alphabet.

Isn’t it interesting that a reporter on an English-medium news website, writing a shock-horror article about falling standards of literacy, should confuse ‘alphabet’ and ‘letter’ in this way? This is a mistake I associate more with Japanese, Korean, or Chinese learners of EFL.

Or perhaps it’s not considered an error in Indian English.

Given the role of English in India, we conventionally call Indian English a variety of English as a Second Language, not English as a Foreign Language. But it’s worth remembering that the number of Indians speaking English as their first or only language is under a quarter of a million (1991 census), or putting it another way less than the population of Barbados. For the remaining ninety million or so Indians who reportedly speak it, it’s not their primary language. So it’s not surprising that in it we encounter some typical EFL errors.
Posted by John Wells at 08:11