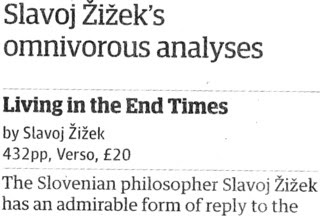 It is only just over two months since I last discussed the question of foreign “accented letters” in ordinary spelling. We need them for loanwords (façade, cliché) and in particular for foreign names (congrats to the Guardian for getting Žižek right, see above). They are perceived as problematic not only because we don’t use them in writing ordinary English, but also because not all software can cope with them (certain email clients being notoriously unable to deal with anything beyond ASCII), and because documentation on how to input them is often inadequate.

The current issue of the Economist has an interesting article on the subject.

OVER at Gulliver, our correspondent reports on his trip through Tromso airport. Or, as a commenter, Lafayette, notes, shouldn't we write it Tromsø, as the Norwegians do?
Our style book rule is to use the diacritic marks on French, German, Spanish and Portuguese names and words. The rest have to do without. Why?

It’s not difficult to input diacritics for those languages nowadays. Users of Word for Windows ought to be conversant with the keyboard shortcuts (see table). They’re just as easy to input in a Mac. 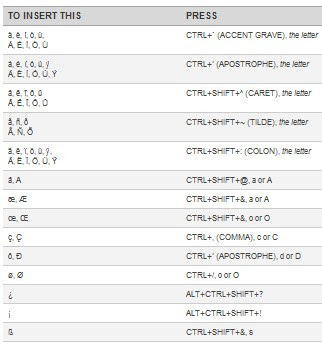 The Economist article was a follow-up to an earlier one that dealt particularly with the diacritics used in eastern European languages.

Estonia[n] has the õ, Latvian the ķ, Lithuanian the ų, Polish the infernally similar ż and ź, not to mention the ł; the Czechs have the ů, the Slovaks the ŕ and the Hungarians the ő. There are dozens of other examples, but you get the point. They tend to get overlooked.

East Europeans will have regained their real place in the world once their names are spelled properly, not mutilated by an inadequate foreign character set.

...But they matter. Estonia’s national anthem, for example, starts: “Mu isamaa, mu õnn ja rõõm” (My fatherland, my happiness and joy). Written in the western character set, “onn ja room” becomes something quite different: the comical "small hut and crawl".

Meanwhile, you will be glad to know that you can include any Unicode character lacking on your keyboard in your blog comments here, but only if you first compose your message in a Unicode-compliant word processor (e.g. Word), then copy and paste. In Word itself, failing implementation of the improvements I have suggested, you can use Insert Character, or alternatively enter the Unicode number and then do Alt-X.
Posted by John Wells at 09:03