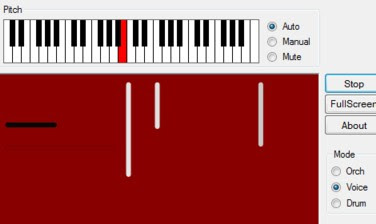 Rick Bidlack sent a message to Jill House and to me

I would like to bring some recent work of mine to your attention, because it involves a recording you made in 1995 called The Sounds of the IPA. I purchased a copy of that disk about 18 months ago, and that gave me the raw materials needed to realize an idea I'd been contemplating for almost two decades. I am a musician, an audio engineer and a computer programmer, and I've had a lifelong interest in language and linguistics. The result of that intersection of circumstance and events is now embodied in a program called Clang, which is available at www.clang.us.com, and yes, those are your voices that we hear in Voice mode.
So please download Clang and have a listen. For me this is a work in
progress. Version 2.0 has just been released (this is the first version with the IPA recordings), and I'm starting to work on the next version which involves orchestrated blocks of sound and long-term temporal structure.

The way you have edited the sounds and generated the ever-changing stream of noise has resulted in some extraordinary sound worlds (reminiscent of everything from baby babble through heavy breathing to the sound of contented hens)! Now I've got to a bit that sounds like an echoing wind tunnel... It's quite fun trying to work out which sounds some of the bits are taken from. It's probably against the spirit of continuously-changing generation, but do you ever record stretches that you like because they achieve a particular effect?