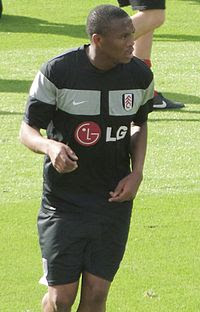 Brian Jongseong Park, who wants to offer some advice to the National Institute of the Korean Language on recommended Korean spellings of names of World Cup squad members, asked about the pronunciation of Kagisho Dikgacoi in the original language. This is the name of a South African footballer, who also plays for Fulham FC in the UK.

A quick internet search seems to indicate that it’s a Tswana name, although the ‘c’ in the spelling suggests a non-Tswana origin, if it does indeed stand for the dental click found in Zulu and other languages. My guess for the original pronunciation would be [kaˈxisʰʊ dɪ(k)xaˈǀoi] based on the scant information I've been able to glean on Tswana (or with [χ] instead of [x]), but there are a few puzzling areas. […]
Also, although this is irrelevant to my question, how is the dental click [ǀ] usually approximated in an anglicized pronunciation? Or are words that have this sound that have found their way into English so rare that there is no usual approximation?

Being no expert on Tswana, I approached the BBC Pronunciation Unit. My former student Jo Kim, now working for the Unit, told me

Our own recommendation for this name is:
kuh-HEE-soh dick-ACK-oy (-h as in hot, -oh as in no, -oy as in boy, stressed syllables in upper case)

A South African contact at the World Service told us that this name is Tswana. I spoke to a Tswana speaker on the phone (so I was unable to see anything!) but I certainly heard this: ka'xisʰo dik'xaǀoi

The 'dee-KHAA-chwaa' pronunciation was actually suggested to us by a colleague at ESPN [an American cable TV network, JCW] at one point as the “correct” pronunciation. I did hear audio of some Anglophone sports commentators based in Africa calling him by that pronunciation but I suspect that 'oi' being pronounced as 'waa' is a gallicization, perhaps due to the abundance of French names in South Africa.

Jongseong also wanted to know about the usual anglicization of clicks in borrowed words. I’ll look at that issue tomorrow.
Posted by John Wells at 08:49