Michael Everson has created an IPA edition of Lewis Carroll’s Alice in Wonderland and has kindly let me see a copy.

It presents the entire text of Alice transcribed into IPA. (This complements his publication of Lewis Carroll works in a variety of lesser-known languages.)

I may have some comments to make on the transcription of particular words and phrases once I have finished reading it. Meanwhile, I thought I would comment straightaway on one striking visual characteristic of the transcription in general, namely Everson’s decision to use not only punctuation and italicization but also capitalization — and capitalization not just for proper names but also, as in ordinary English spelling, to mark the beginning of a sentence and even for the pronoun I.

In the days when the Journal of the IPA was called Le Maître Phonétique and written entirely in transcription, the rule was very clear: phonetic symbols are always lower-case. To indicate that a word was a proper name, the orthographic capitalization was sometimes replaced by a preposed asterisk, a usage specified in the old Principles of the IPA booklet (1949).

On the other hand the same booklet concludes with a brief note on Phonetic Spelling, which does use capitalization not only for proper names but also to mark the beginning of a sentence.

The decision to distinguish upper and lower case means that Everson also had to decide on a suitable upper-case shape for each IPA symbol required in the transcription. Since he is a typographer and font designer, this was right up his street. Here are his solutions. 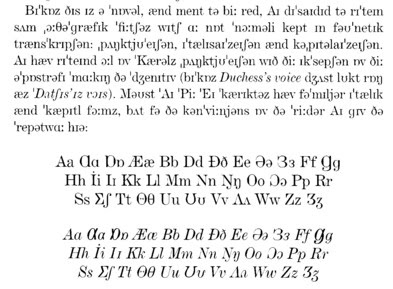