What happens when you want to italicize the ash symbol, æ? Here’s what it looks like in two fonts I often use, Cambria and Segoe UI. In the first, on the left, it retains the usual shape, but in the second it looks like a combination of ɑ and e rather than a and e. This makes it easy to confuse with an italic œ, namely œ. I certainly prefer the first, Cambria, type, which is why I was a bit surprised at Michael Everson’s version of this italic letter (blog, yesterday).

In the 1949 Principles of the IPA there was a special page devoted to cursive forms of the symbols. Back in those days joined-up handwriting was much more general than it is now, and people no doubt needed to know how to write the IPA characters with pen and ink in a way that enabled them to be joined (where appropriate) to the characters on either side. Note the careful attention to making a clear difference between cursive æ and cursive œ. 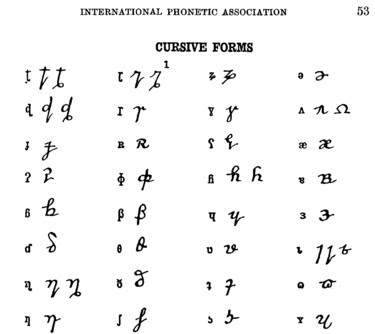 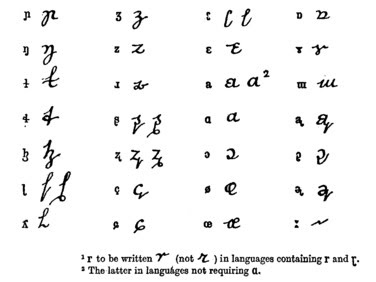 Jones himself used these cursive forms when making notes, and I suspect that it was he who handwrote the characters you see here. So did Hélène Coustenoble, who taught me French phonetics. But none of his successor generation (Gimson, O’Connor, Arnold, Pring, Trim) at UCL used these cursive forms; nor does anyone alive today (as far as I know).

Without this key I think it might be difficult to recognize the cursive forms shown for ʎ ɹ ç ʕ ø ɐ ɩ and ʏ, not to mention the shape suggested for the length mark ː. The cursive form of ɲ, which I have indeed encountered, can easily be mistaken for some people’s handwritten p.

Perhaps it’s just as well that nowadays we write the symbols as block (lower-case) letters — or use a keyboard.