I expect most families have private, family words, used only within the family and never with outsiders.

When I was growing up, we certainly did. And special family (mis)pronunciations, too. I’m not thinking just of nursery words for excretion and body parts, though of course we had those.

For example, my father and brothers and I (though perhaps not my mother) would often pronounce jug as jʌɡ (“yug”) and jump as jʌmp. My father would tell me to get a ˈjʌɡ əv ˈɒlɪndʒ (jug of orange (squash)) to put on the table for a meal. Whether this betrayed some paternal or precocious filial awareness of IPA and historical phonology (confusion of liquids) I do not know.

We also sometimes called ice cream ɪˈkekriæm, obviously in a playful misinterpretation of the spelling.

Our dog was called Carlo, but we sometimes called him Doggus ˈdɒɡəs instead, so recruiting him to the Latin second declension masculine. (We had all started Latin at a pretty tender age.)

Interestingly, when my German exchange friend Klaus came to stay with us at the end of my stay with his family when I was eighteen, I remember that he misinterpreted this name as Doggers ˈdɒɡəz, which would put it in line with champers ‘champagne’, Johnners (Brian Johnstone the cricket commentator) and the Staggers (the New Statesman periodical). 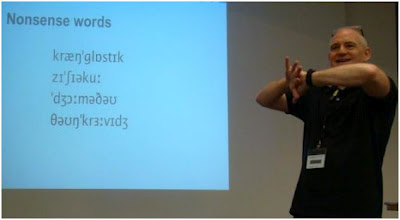