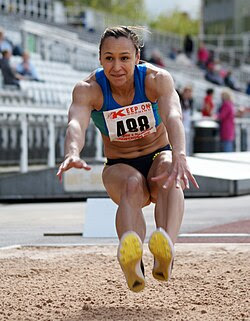 All of the UK —and particularly all of London— is still on an Olympic high. We feel euphoric, full of goodwill to all, proud of who we are, proud of what we have achieved, very special.

But I must descend from the sublime to the trivial. There were two Olympic athletes in Team GB whose names are susceptible in BrE to intrusive r: the heptathlete Jessica Ennis ˈdʒesɪkər ˈenɪs and the boxer Nicola Adams ˈnɪkələr ˈædəmz.

Nicola’s opponent in the final bout was the Chinese boxer Ren Cancan. My colleague John Maidment has written (ranted) elsewhere about commentators’ mangling of Chinese names because of not understanding the spelling-to-sound conventions of Hanyu Pinyin. The BBC commentator wasn’t too bad with Ren (Chinese 2ɻən), but the temptation of rendering Cancan (Chinese 4tsʰan 4tsʰan) as if we were at the Moulin Rouge was too great, and she was repeatedly called ˈkænkæn.

Just remember, folks: Pinyin c is like in Polish, a voiceless alveolar affricate, though in Chinese aspirated. (Its unaspirated counterpart is spelt z, like in German.)

I’ve written a day-by-day account of my stroke here.