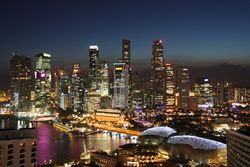 How do you pronounce the adjective from Singapore, i.e. Singaporean?

With most English suffixes we can be clear about their effect on word stress. Some have no effect at all, e.g. -ing. Some attract the main stress, e.g. -eer, -ette, as in mountaiˈneer, kitcheˈnette. Some cause the main stress to fall on the syllable before the suffix, e.g. -ity, as in aˈcidity, viˈcinity.

But with -ean there are two possibilities. In some cases it throws the main stress onto the preceding syllable, just like -ity. Thus we say cruˈstacean, Proˈmethean and Shakeˈspearean. But in other cases it attracts the main stress to itself. Thus we say Euroˈpean, epicuˈrean, Hercuˈlean, Jacoˈbean, Pythagoˈrean and Sisyˈphean.

Which brings us to Singaporean. In LPD I gave priority to ˌsɪŋəˈpɔːriən; but I’ve just heard a British television newsreader say ˌsɪŋəpɔːˈriːən. (Irrelevantly, some speakers have ɡ after the ŋ. That’s not what I’m focusing on.)

I think Tyrolean is equally variable.

At least with the less familiar words in -ean this uncertainty means that no one need worry about which stress pattern is correct. Acheulean, anyone? Cytherean, Labradorean, Mozartean, Saussurean, Tartarean?