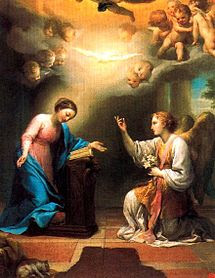 My partner’s name is Gabriel. Like other English-speaking bearers of this name, he pronounces it ˈɡeɪbriəl. However not everyone he meets appears to be familiar with this name, which is not as frequently encountered nowadays as perhaps it once was. People who do not know him quite often read his written name as ˌɡæbriˈel, which is properly the pronunciation that belongs with the female version of the name, Gabrielle. Some use a compromise pronunciation ˈɡæbriel.

I don’t know how long the female version has been around, presumably first in French and now also in English (not to mention Italian Gabriella and German Gabriele).

Although angels are supposed to be genderless, the archangels Michael and Gabriel are treated in English grammar as masculine (taking ‘he’, not ‘she’ or ‘it’ as their anaphoric pronoun), and as personal names are exclusively masculine.

Nevertheless, Michael has now acquired female equivalents — Michelle and the rare Michaela, and Gabriel has likewise acquired Gabrielle. As for other archangelic names, I’ve never come across a female form of Raphael or Uriel.

But in English the female form is regularly stressed on the final syllable, which gets a strong vowel, and is thus distinct (usually!) from the male form, which has initial stress and a reduced vowel in the last syllable.

Compare Daniel, the prophet cast into the lions’ den. As a man’s name in English he is ˈdæniəl, and again there is now a female form ˌdæniˈel, spelt in English as Danielle, though the French form is actually Danièle (again homophonous in French with the male form, give or take a schwa).

I don’t know enough about French to know why Gabriel forms the feminine by doubling the l while Daniel does it by adding a grave accent (but compare appeler — j’appelle as against geler — je gèle). Nor do I know enough about the history of English to know why Gabriel ends up with eɪ but Daniel with æ from what was presumably the same vowel in Latin/Greek/Hebrew (for the quantity of a in these phonetic contexts, compare Abraham and germanium).