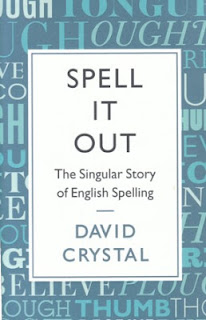 I’ve been reading David Crystal’s new book Spell it Out. Like everything he writes, it is entertaining and well-informed, and thoroughly to be recommended.

The core of the book is a historical account of how our spelling ended up as the infuriating mess that it is. We have the Anglo-Saxon monks adapting the Latin alphabet to the sounds of Old English, bequeathing us the gn- of gnat and ways of coping with vowel length, with final e to show a long vowel and consonant doubling to show a short one (hence hope — hoping and hop — hopping). There were the Norman clerks faced with writing an unfamiliar language, experimenting with various possible solutions and hitting on such ideas as letter doubling to show the long vowels of deep and moon. There was even the monk Orrm who tried unsuccessfully to persuade everyone to adopt a more rational and systematic orthography. Meanwhile, our basically Germanic language had to digest thousands of new words of Romance origin, which meant for example that we applied the consonant doubling principle to show the Middle English pronunciation of various French-derived words (e.g. baggage).

Contemporary handwriting meant that vv looked confusingly like the w that had taken over from OE wynn (ƿ); so doubled v was avoided where it would otherwise have been called for, for example after the short vowel of loving (compare the single v of roving); meanwhile even single v was not at that time distinguished from u, so that lov looked like lou, which led to the adoption of a final silent e to show that there was a consonant sound at the end of love, have, give — leaving the anomaly that persists to this day when we compare these words with grove, rave, drive; and leading to the homographic ambiguity of live (which can be either the verb lɪv or the adjective laɪv).

Then came major sound changes, notably the Great Vowel Shift, which left us with sets of related words in which the common element is still spelt identically but nowadays pronounced very differently, and in which medieval scribes and printers opted to follow the sense rather than the sound: crime — criminal, type — typical, cave — cavity and so on.

Then came a concern for etymology. As Latin words were borrowed they kept their Latin spellings (hence single r in florid but double in horrid). The unpronounced etymological b was “restored” in debt and doubt and likewise the p in receipt, though not, for some reason, in the exactly parallel deceit and conceit. Somewhere along the line Flemish compositors decided to introduce an h into ghost.