I found that in China the inaccurate term ‘incomplete plosion’ (blog, 25 Oct 2011) was still widely in use. Furthermore, people apply it not just to the gemination type of no audible release (e.g midday) and the overlapping type (e.g. subcontractor) but also to nasal release (sadness) and lateral release (sadly). They don’t know about preglottalization (glottal reinforcement, as in laptop), despite this kind of articulation being a striking characteristic of Cantonese; but if they did, I expect they’d call that incomplete plosion, too.

Here’s what it says in the recently published (and generally pretty good) textbook Better Pronunciation for Communication (Shanghai Foreign Language Education Press, 2012) by Liu Sen of East China Normal University. I read the manuscript of this book before publication, and managed to persuade the author to remove nasal release and lateral release as subcategories of ‘incomplete plosion’ and treat them separately; but she didn’t feel she could drop the term ‘incomplete plosion’ altogether, as I suggested, since it was, she said, so well established in English phonetics terminology in China.

Now, seeing the textbook as printed rather than in manuscript, I realize I ought to have intervened more forcefully.

Of the four examples given, numbers 2, 3, and 6 each have a plosive that is more likely to be elided than given no audible release; in number 5 NSs would be more likely to use a glottal stop or a no-audible-release assimilated [p]. A hold has "double the usual time" only in the gemination type, of which there are otherwise no instances here.

In numbers 3 and 4 of these examples NSs would probably elide the highlighted plosive; in numbers 1, 2, and 5 the plosive would have an ordinary oral release (though masked by the following fricative); in number 6 we might alternatively use [ʔ].

You can see why I chose as the topic for my workshop session in Shanghai ‘The characteristics of English plosives, and in particular the various ways in which they can be released’. Here is my take on what in my opinion is mistermed ‘incomplete plosion’ (even though, as Alex Rotatori pointed out, my colleague Patricia Ashby has used this term in a recent textbook). 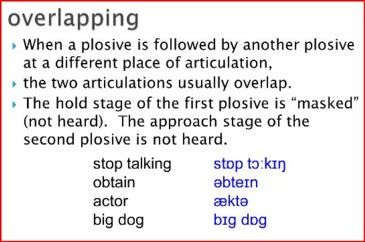