I’ve been reading David Abulafia’s The Great Sea: a Human History of the Mediterranean. Now that I’ve got to the part dealing with the second millennium AD, one of the seaports I find frequently mentioned is the Levantine port known in English as Acre, in the north of what is now Israel.

I have always assumed that in English we pronounce it identically with the common noun referring to the unit of measurement equivalent to about two-fifths of a hectare, i.e. ˈeɪkə. Wikipedia, however, asserts that it is ˈɑːkə(r). I see that Merriam-Webster gives both of these possibilities as well as a third one, ˈɑːkrə.

There are various English placenames that include the element acre, or rather its OE form æcer ‘cultivated land’: for example, Sandiacre ˈsændieɪkə in Derbyshire, and also Castle Acre, South Acre and West Acre in Norfolk, all with ˈeɪkə.

The village of Talacre, not too far away but in north Wales, is properly tælˈækreɪ, being a Welsh compound of tâl ‘end’ plus the plural of acer from English acre. The standard Welsh plural form is, I believe, aceri; this acre must be a local variant acrau, with -au pronounced in the usual local way as e. 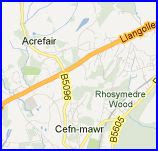 For the same reason Acrefair near Wrexham is properly ˌækrɪˈvaɪə (Welsh akreˈvair). Etymologically, the fair element in this name is the soft-mutated form of Mair ‘Mary’, so the name means ‘Mary’s acres’.