I had a phone call a few days ago from someone trying to get in touch with David Rosewarne. The caller thought I might have his contact details. I was unable to help, since as far as I remember I have only met Rosewarne once, and that briefly; the last I heard of him was that he was working in Malaysia, but I do not know where he might be now.

David Rosewarne’s great claim to fame is that in October 1984 he coined the expression “Estuary English”, in an article published in the Times Educational Supplement.

In doing so he gave expression to the widespread perception that Daniel Jones-style RP was gradually losing its status as the unquestioned standard accent of educated English people. Or, putting it a different way, that RP was changing by absorbing various sound changes that previously had been restricted to Cockney or other non-prestigious varieties.

Two years earlier, in my Accents of English, I had written

Throughout [London], the working-class accent is one which shares the general characteristics of Cockney. We shall refer to this accent as popular London. […] Middle-class speakers typically use an accent closer to RP than popular London. But the vast majority of such speakers nevertheless have some regional characteristics [emphasis added]. This kind of accent might be referred to as London (or, more generally, south-eastern) Regional Standard.

I added the warning

It must be remembered that labels such as ‘popular London’, ‘London Regional Standard’ do not refer to entities we can reify but to areas along a continuum stretching from broad Cockney (itself something of an abstraction) to RP.

So Rosewarne’s observations in a sense contained nothing new. He muddied the waters unhelpfully by referring to details of vocabulary and grammar (which have nothing to do with “a new variety of pronunciation”). But the name he coined, Estuary English, was taken up quite widely, gaining resonance eventually not only with journalists but also with the general public, to such an extent that we can now expect to be readily understood if we describe someone’s speech as “estuarial”.

The estuary Rosewarne was thinking of was of course the Thames estuary, which in a geographical sense might be interpreted as extending from Teddington near Kingston upon Thames (the point where the river becomes tidal) down to Southend-on-Sea (where the Thames enters the North Sea). Rosewarne’s original article says “the heartland of this variety lies by the banks of the Thames and its estuary, but it seems to be the most influential accent in the south-east of England”; though later writers, particularly Coggle in his Do you speak Estuary? (1993) implied that it covered the entire southeast of the country. It was left to my colleague Joanna Przedlacka to demonstrate that it did no such thing (see her 2002 book Estuary English? and this summary). Przedlacka demolished the claim that EE was a single entity sweeping the southeast. Rather, we have various sound changes emanating from working-class London speech, each spreading independently.

Rosewarne’s suggestion that EE “may become the RP of the future” led to credulous excitement in the EFL world, particularly in central Europe and South America.

It was in response to media and academic interest in the topic that in 1998 I set up a website “to bring together as many documents as possible that relate to Estuary English, as a convenient resource for the many interested enquirers.”

One thing I did myself was to consider how we might agree on a phonetic transcription scheme, which would be needed for pedagogical purposes if we seriously wanted to teach this putative new accent. See this article. But no one followed this up by criticizing my proposals or suggesting anything better. 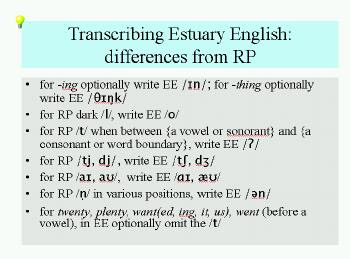 All the excitement gradually died down. I last had cause to update the website in 2007. By the time I retired, in 2006, this was my one-page summary of the issue. EFL teachers, meanwhile, mostly know that we just need to update our pedagogical model of RP in the minor ways outlined in LPD.