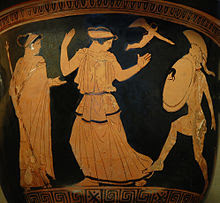 In Britain the woman’s name Agatha is pronounced ˈæɡəθə, with stress on the first syllable. As far as I know, this is the stress pattern of this name in most kinds of English. In Montserrat, though, I found to my surprise that people stress it on the second syllable. I have never heard the pattern əˈɡæθə anywhere else.
Etymologically, the name is of Greek origin. It looks as if it ought to be the feminine form of the adjective ἀγαθός agathós meaning ‘good’, though in Attic Greek the feminine nominative singular is actually ἀγαθή agathē. So it must have passed via Latin to acquire the Latin feminine ending -a. In English it is also subject to the Latin stress rule, which means that since the penultimate vowel is short the stress goes on the first syllable — except in Montserrat.
Perhaps the best-known Greek female name is Helen(a). It too has -ē in Greek: Ἑλένη Helénē. Here too, if we don’t thoroughly anglicize it as Helen or Ellen, we have Latinate -a and some uncertainty about the stress. In the name of the island St Helena it is (h)ɪˈliːnə, but as a personal name we usually have ˈhelənə. The latter is what the Latin stress rule produces, given that the vowel in the second syllable is short in Greek. The state capital of Montana, too, is ˈhelənə.

As a scientific unit, a “millihelen” is that degree of facial beauty which suffices to launch a single ship (see discussion here).
Posted by John Wells at 17:06