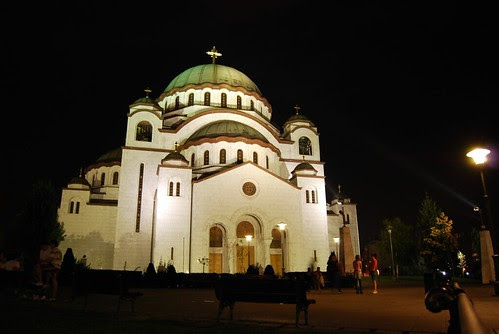 Serbian is unusual among languages in that it can be written in either of two different alphabets, Cyrillic (like Russian) or Latin (like English). As Wikipedia puts it, “Serbian is a rare and excellent example of synchronic digraphia, a situation where all literate members of a society have two interchangeable writing systems available to them.” Compare the related languages Bulgarian, which is written only in Cyrillic, and Slovenian, which is written only in Latin letters.
On the streets of Belgrade some advertisements or names of businesses are in one alphabet, some in the other. The same shop window may display written messages in both. Many road signs show names of destinations in both, first in one and then in the other, thus for example Београд Beograd.
The letter-to-letter correspondence between the two Serbian alphabets is mostly one-to-one: to each Cyrillic letter there corresponds a Latin letter (perhaps bearing a diacritic), and vice versa. But not entirely so, because there are certain Cyrillic single letters that correspond to Latin digraphs (two-letter sequences). For example, Cyrillic њ corresponds to Latin nj and Cyrillic џ to Latin dž. (Phonetically, these stand for [ɲ] and [dʒ] respectively.)

Another notable characteristic of the Serbian writing system is that the spelling is very close to being perfectly phonemic (at least at the segmental level — though stress and possible vowel length are not indicated). No child has to learn how to spell individual words: you just write them the way you say them, and say them the way you write them. (This is of course notoriously not the case in English.)

My picture shows the cathedral of St Sava (Храм Светог Саве / Hram Svetog Save) in Belgrade. (Photo: Ana B)
Posted by John Wells at 06:14