A member of the public wrote to the Spelling Society, of which I am President.

I have recently taken issue with the BBC for concluding that it is now 'acceptable' for H to be pronounced Haitch. This appears to be on the guidance of Professor John Wells and on the basis that it is commonly used.
Samuel Johnson's first dictionary ascribed spellings to all letters of the alphabet, including AITCH for H.
I would be interested to hear therefore why you seem to be perpetrating this peculiar distortion as opposed to upholding the correct pronunciation.

I intially took up this issue after writing to Heart Radio about one of its presenters using “Haitch” and was told that this was because the BBC said it was an “attested legitimate variant”. The BBC in reply led me to Professor Wells and thus your organisation. It may be ‘popular’ but it is still wrong. My ambition is merely for institutions such as the BBC, and indeed yourselves, to hold the line on this letter, and advise against this awful and ignorant pronunciation which is now spreading.

I demurred at the apparent misrepresentation of what I had contributed to the debate.

”This appears to be on the guidance of Professor John Wells and on the basis that it is commonly used.”

I have never given any such “guidance”. I have never recommended “haitch” as the name of the letter. What I did do was carry out a survey into people’s preferences in the UK, which revealed that only 16% of respondents prefer “haitch” over “aitch”, while 84% prefer “aitch” (like you, me, and the Chair of the Spelling Society). However, younger speakers are more likely than older speakers to prefer “haitch”, so this pronunciation is on the increase. The details are to be found in my Longman Pronunciation Dictionary (Pearson Education, 2008).
You might like to read two or three entries in my blog: for 19 Dec 2007 and 28 Dec 2007 and for 2 Nov 2010, with the comments left on the latter.

Please do not spread false reports about what I supposedly said. 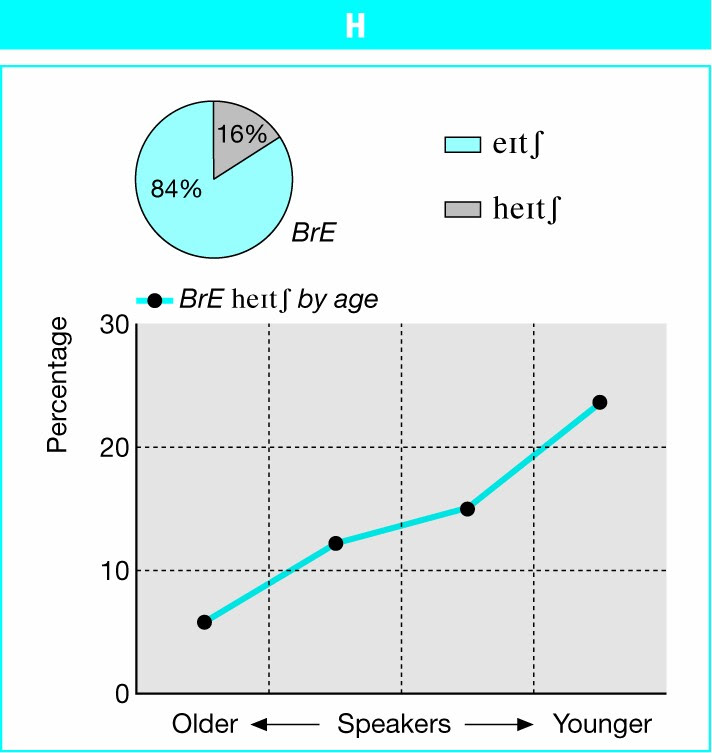 With hindsight, my reply was perhaps too prickly. But it seemed to me that the lady who had written the letter wanted to shoot the messenger because she did not like the message. My pronunciation preference poll had revealed that a minority of British people — a growing minority, but still a minority — prefer to name the letter heɪtʃ, and therefore may (if they think about the matter at all) consider this to be the correct name, and the traditional eɪtʃ to be antiquated, slovenly, or indeed wrong.

In LPD I included a note.

The form heɪtʃ is standard in Irish English, but traditionally not in BrE or AmE. It is, however, spreading in BrE.

You could indeed argue that on the basis of these polling figures I was wrong in LPD to affix the sign § (“non-RP”) to the heɪtʃ form. In doing so, though, I gave the lie to the Telegraph’s jibe that I ‘breathed no word of criticism of those who did [use a minority-preference variant]’.

But no. I can have my preferences and prejudices as much as anyone else. From time to time they no doubt show through in what I write. But I am enough of a scientist to have respect for the facts, and to wish to investigate to the best of my ability what the facts are.

And the fact is that, despite any feelings I may have on the matter, despite the dislike, nay loathing, that other people may feel towards new pronunciations of particular words or towards sound changes in general, there is little any of us can do about it.

In an EFL context, it is perfectly reasonable for learners to look to me (and other academic linguists) for advice on what is the correct pronunciation for them to use. In the same way I have never hesitated, as a language learner, to ask speakers of German ‘Wie sagt man das? Was ist die Aussprache?’, or a speaker of Welsh ‘Ydw i’n ynganu hynny’n iawn?’ when confronted with a written word that I am not sure about. In an acting context, it is perfectly reasonable for drama students and actors to seek the facts about how a given character would be likely to speak. In a speech-and-language-therapy context, it was always part of my professional duties to educate SLT students about the facts of ordinary English pronunciation and to combat some of the myths.

But it’s not my duty, as an academic linguist, to lay down the law about how people should pronounce their own native language.

Yes, if some actor in a historical drama were to put the pronunciation heɪtʃ in the mouth of an upper-class character, we can point out that it would be an anachronism (like the initial-stressed contribute heard from a titled character in Downton Abbey on television recently).

Yes, we can complain if presenters of classical music lack the knowledge to make a reasonable attempt at Italian or German names. The BBC rightly requires of its newsreaders great carefulness in the pronunciation of proper names, including those from other languages, and maintains a Pronunciation Unit to advise them by supplying relevant information.

But with ordinary English words that are not proper names? Used by disc jockeys on a popular music radio station? There’s really nothing we can do. Even writing to the Spelling Society won’t help. (What’s it got to do with spelling, anyway?)

We just have to get over it.

I shall be busy with other matters tomorrow. Next posting: 21 June.