The Guardian has now turned its attention to Italian, with free phrasebooks every day this week. As with the Spanish series (blog, 8 July), each booklet contains one page devoted to pronunciation. And as with the Spanish series I want to complain: if you can’t say anything correct and useful, don’t say anything at all.
Don’t get me wrong: most of the stuff in the phrasebooks is correct and useful. But not all of it. I would criticize two things in particular about the Italian pronunciation guide.
First,

[Italian] r is rolled, though not as much as in Spanish

What is the ordinary reader to make of this? If s/he can produce a trill, should s/he use it in Italian? Does “not so much” mean that the number of vibrations in an Italian [r] is lower than in a Spanish [r]? Or that articulations other than a trill are more prevalent than in Spanish? Or what?
Both languages have the contrast between tap and trill in intervocalic position, e.g. Spanish pero vs. perro, Italian caro vs. carro. The only sense I can make of the statement in the phrasebook is the highly technical one that in initial position Spanish r is always trilled, whereas Italian r is quite often a tap [ɾ]. That fact (if it is one) does not really pass the test of usefulness.
Second,

That claim does not pass the test of correctness. Anyone who remembers a little French from school knows that the Italian accent mark in this word is a grave accent, not an acute one. This sort of elementary error does not inspire confidence in the rest of the phrasebook.
Nor does the sloppy wording of grammatical “help” such as this: 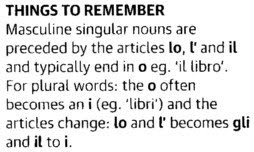