phonetics for the layman

It’s depressing that some writers of foreign language textbooks have so little knowledge of phonetics. They don’t know how to teach pronunciation (except by imitation). They don’t have the understanding to describe speech sounds. They don’t have the vocabulary to explain how sounds are made.
So when they come to write textbooks they can’t give clear explanations of how to pronounce the language.
The Guardian is publishing a series of Spanish phrasebooks this week. At the back there is a Pronunciation guide. Put yourself in the position of a naïve would-be learner of Spanish, and see how much help it offers. 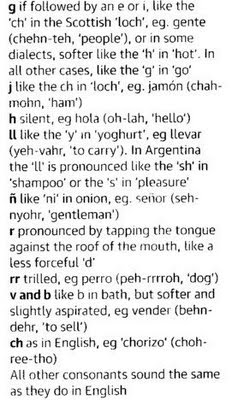 What kind of sound would you take a less forceful ‘d’ to be? A fricative, perhaps, or an approximant? Or a very lenis plosive with no voicing? No, that’s the description the booklet gives of the Spanish single r — which is actually a pretty forceful tap, [ɾ].

Fortunately there is a supporting audio CD available (at a price). But if the author devotes a page in the phrasebook to pronunciation it ought to give accurate and helpful advice.

If you have even a very elementary knowledge of Spanish phonetics, you’ll know that the voiced plosives /b d g/ have weakened allophones [β ð ɣ] intervocalically and finally. The Guardian booklet tells us nothing about this for the dental and velar.
You’d think it would at least have mentioned that the d in nada sounds much more like the th (ð) in English father than it does like English d. I would have thought this more important than telling us about Argentinian variants of ll.
Q: If the plosive-fricative alternation in /d/ and /g/ is not worth mentioning, why does the author mention it for /b/? A: Because that’s where the spelling forces it on everyone’s attention. But what does he say? that v and b are “like b in bath, but softer and slightly aspirated”.
Oh dear, oh dear. Here we have a phonetic technical term, aspirated. It’s just that the author doesn’t understand its meaning. For the record, no plosives in Spanish are aspirated (= with an interval of voicelessness between the plosive release and the following segment).
In fairness, I must report that the author, when I remonstrated with him, told me

I can't remember now whether that definition was borrowed from another source or if it was my own specific attempt to describe the bilabial fricative in layman's terms, but it's a fair point about the misappropriation of a technical term...
I suppose I could defend the position by saying it was a non-technical usage (consonant with the rest of the guide), but on the other hand I'd certainly avoid it if I was doing the guide again.

Let me try to explain the facts as I understand them in terms that the ordinary reader might be able to understand.

In Castilian Spanish, the letters b and v refer to the same sound.
At the beginning of a phrase or after m or n this sound is just like an English b. (So vaso sounds like “BAH-so”, and enviar is “em-bee-AHR”.) Elsewhere it is pronounced like an English v, except that you use the two lips rather than the lower lip and the upper teeth.

For a language learner with some phonetic training, it’s easier. All we need say is

Initially or after a nasal /b d g/ are plosives, [b d ɡ]. Elsewhere they are realized as fricatives, [β ð ɣ] (or the corresponding approximants).