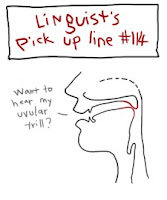 The uvular trill, [ʀ], is very rare among the world’s languages. However the languages that do have it include French, German, and Dutch — though in each case there are other speakers of the language, perhaps the majority, who use a uvular fricative (or something else) instead.
One thing I noticed in Paul Joyce’s German pronunciation pages was that the uvular trill is what he recommends for “consonantal r”.

The German consonantal 'r' is described as a 'roll' or 'trill', by which we mean that the speech organs strike each other several times in quick succession in the articulation of this sound. In northern and central Germany, this sound is made towards the back of the vocal tract, with the back of the tongue raised towards the uvula in order to create a narrow passage. When the airstream moves through this passage, the friction thus created causes the tongue to touch the uvula either once (uvular flap) or several times (uvular roll). The 'r' sound thus created has a rasping throat-clearing quality which can be equated to a less extreme version of the sound produced when gargling.

I think I’d have said that the uvula (the active articulator) touches the back of the tongue (the passive articulator) rather than the other way round: but no matter. The interesting question is whether learners of German should be encouraged to use a uvular trill [ʀ], as Joyce suggests, or rather a uvular fricative [ʁ]. Joyce does add

Although originally used in informal contexts, this [fricative] variant of consonantal 'r' is slowly emerging as the most common pronunciation of the sound in Germany.

My own impression, for what it’s worth, is that a uvular fricative (or approximant) is by now much more widely used than a uvular trill. This agrees with what Mangold says in the current (6th) edition of the Duden Aussprachewörterbuch, where he writes

Furthermore, I think (am I right?) that most learners would find a uvular fricative easier to learn than a trill.
[Picture credit: Sarah Churng.]
Posted by John Wells at 14:28