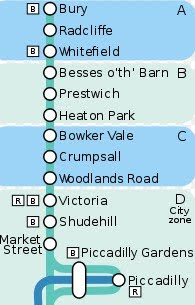 — of which just these two are not Scottish. They are both places in England, specifically in Greater Manchester.
I was wondering how they are actually pronounced.

The first place, Besses o’ th’ Barn, lies between Manchester and Bury. It has a station on the Metrolink line and gives its name to a brass band, Besses o’ th’ Barn Band.
In traditional Lancashire dialect, the definite article takes the preconsonantal form /t/, usually realized as [ʔ], as in in t’ road (in the road) ɪnʔ roːd. So the expected pronunciation of the placename would be ˈbɛsɪz əʔ ˈbaːn.
My nephew grew up just the other side of Bury and will have passed through Besses o’ th’ Barn station many times on his way to and from Manchester, so I rang him to ask how people pronounce it. His reply was that actually everyone just calls it Besses. That’s what Wikipedia says, too.

The second place is slightly problematic. It is a district in Salford (for me ˈsɔːlfəd, locally ˈsɒlfəd), Greater Manchester. Jack gives it as Irlam o’ the Heights. However the BBC Pronouncing Dictionary of British Names (2nd ed., ed. G. Pointon, OUP 1990) shows it as ending in Height rather than Heights.

Before a vowel sound the Lancashire article takes the form /ð/. The local dialect normally drops all /h/s, making the article in this name prevocalic, so as far as the definite article goes it is pronounced just as one would expect.
But perhaps both Jack and the BBC dictionary are wrong. On-line sources show the name used by the local authority as Irlams o’ th’ Height, with -s attached to the first element rather than the last and the article written as th’. This on-line map agrees. And I notice that the local Methodists have a church called Height (not Heights) Methodist Church.
I expect the place is called ˈɜːləmz ə ˈðaɪt or just ˈɜːləmz. Perhaps someone can tell us.
Posted by John Wells at 11:20