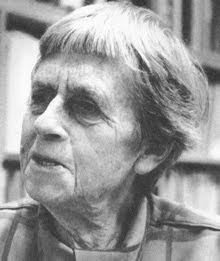 I was sorry to hear of the death of yet another notable contributor to English dialectology: Eva Sivertsen, former Professor of English at Trondheim. She will be remembered for two books in particular: one, Fonologi, in Norwegian, 1967, which I have not read, and the other, Cockney Phonology, 1960, which was one of the main sources I used for my discussion of London pronunciation in Accents of English, vol. 2. This was a version of her PhD dissertation. Her data collection in London was before my time, but I remember Gimson describing her assiduously cycling off to Bethnal Green to make her recordings.
In keeping with what was then seen as modern and trendy in phonology, she applied the Trager-Smith system, which involved analysing English long vowels and diphthongs as consisting of a short vowel plus one of the semivowels (“peak satellites”) /j/, /w/, /h/, the latter being realized postvocalically either as a schwa offglide or as the lengthening of a mid or low vowel. By 1980, when I was writing, that was neither modern nor trendy, but it was no problem to reinterpret her excellent and detailed data.

I got to know her when teaching part-time at Trondheim in the early 90's. Although we are of course very sorry to have lost our friend, we take some comfort in having assisted her relatives in establishing contact with the research group investigating London English (Jenny Cheshire, Sue Fox and Paul Kerswill). They have received invaluable recordings and other documentation from her work in London that were not part of her dissertation and are very excited about it. In a message Nils-Lennart [Johannesson] received from her family, it says that she experienced great joy during her last months knowing that the London people appreciated her donation. Her niece writes that this made her 'regain her dignity'.

Graham Pointon has also written about her in his blog. 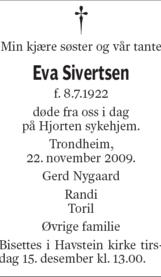