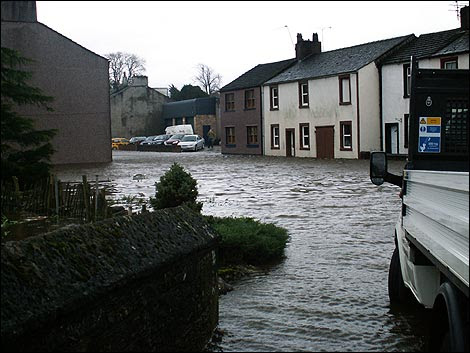 Cockermouth in Cumberland has been in the news recently because of disastrous flooding. Here’s Rod Liddle in yesterday’s Sunday Times:

An extra irritation for the poor people of Cockermouth, as if they needed such a thing, is the determination of television reporters to mispronounce the name of the flood-stricken town. They seem unwilling to articulate the first syllable, so that it comes out as “Currmouth” or, in the case of very posh reporters from the BBC, “C’mouth”. It must annoy the locals because it enrages me: I scream the first syllable at the TV every time it is mispronounced. Let’s hope the Sheffield suburb of Penistone stays dry this winter.

I must say I haven’t noticed anything particular about television reporters’ pronunciation of the first syllable of Cockermouth. I haven’t heard anyone reducing ˈkɒkə to just kə as Rod Liddle implies. (Though I suppose a few people might get as embarrassed about this name as American tourists in London sometimes do about Piccadilly Line tube trains showing the destination Cockfosters. Roostermouth, anyone?)
It was the final syllable that I found interesting, the -mouth part. Harry Campbell noticed, too.

It's always pronounced with the last syllable unobscured as in the mouth on your face, rather than -məθ. I had the idea from somewhere that only in Scotland was this the pattern, as in Eyemouth. Compare Burnmouth (in the Scottish Borders), pronounced burn-mouth, with Bournmouth (-məθ).

Although outsiders may say -maʊθ, I think the locals mostly say -məθ in Cockermouth, as you would expect for a place in England. Listen to a resident, Sue Cashmore, and a Scottish reporter, Laura Bicker; also the Chief Constable of Cumbria. They all say -məθ.
When I was a boy my father twice took a locum near Maryport on the Solway coast. We would have outings to the Lake District, taking a bus to Keswick (ˈkezɪk) that passed through Cockermouth. Being outsiders, we called it -maʊθ.
Posted by John Wells at 11:44