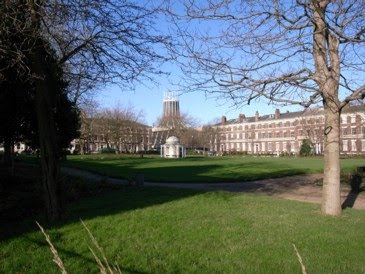 Yesterday I paid a quick visit to the University of Liverpool to chair a fascinating lecture by Wim Jansen of the University of Amsterdam, who has carried out a corpus-based comparison of the Esperanto of 1903 with that of 2003. He showed that over the intervening century some Esperanto affixes have acquired a life of their own: for example ege, from the augmentative suffix -eg-, was unknown a hundred years ago but is now a significant rival to tre (very) and multe (much).
Anyhow, on my way through the town, as I walked back to the station, I was intrigued to see a hairdresser’s punningly called Ben Hair. It took me back.
(Explanation: in Scouse, the local accent of Liverpool, the SQUARE and NURSE vowels are merged. Think chariot races.)
We had the same merger where I grew up, although our local accent was Lancashire rather than Scouse. When I was at primary school there was a girl in the class called ˈmɜːrɪ. I would clutch 5d ˈfaɪfpəns in my hand every day to pay my ˈbʊs fɜː. (That would have been a ˈθrepni ˈbɪt and two pennies, or I’d have got a penny change from a tanner. Question for the young: how much change would I have got from half a crown?)
Those who remember Cilla Black (a Scouser) from the television programme Blind Date will recall that she was forever introducing girls called klɜː or ˈsɜːrə.
My picture shows Abercromby Squɜː with part of the University and one of Liverpool’s two cathedrals.