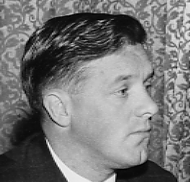 Hard on the heels of yesterday’s blog comes news of another death: that of Stanley Ellis, the distinguished dialectologist, who has died at the age of 83.

Stanley Ellis was one of the principal fieldworkers on the Survey of English Dialects conducted under Harold Orton at the University of Leeds half a century ago. He brought to this work not just accurate observation, recorded in careful IPA notation, but also, famously, a striking ability to establish a good rapport with the informants, who were mostly elderly agricultural labourers in the north of England. Stanley’s own clearly northern accent and way of speaking must have helped in this; but he was also just a very friendly man who could get on well with all sorts.

He was also extensively involved in forensic phonetics, being the first person to give expert evidence on speaker identification in an English Court, at Winchester in 1965.
In later years he and I sometimes used to work together lecturing visiting Americans on speech varieties in England. We did a kind of double act, perhaps slightly exaggerating the difference between our backgrounds: I played the ex-public-school RP speaker, he played the rustic local. (In reality and in contrast, I too am a northerner from a small village and he was a highly educated academic.) I last saw him at a meeting of the Yorkshire Dialect Society, which he helped run.
Posted by John Wells at 13:39