OK, it’s a bit early yet for Christmas (though I’m singing in a Christmas show in just one week’s time). Sorry.
I was thinking about the carol Joy to the World — not one commonly sung in Britain when I was young, but now very familiar. The first verse ends with the repeated phrase and heaven and nature sing. Or actually, in the score I have, it’s and heav’n and nature sing (with an apostrophe) the first few times but then and heaven and nature sing (no apostrophe) the last two times. The slur marks on the score, however, indicate that heav’n (or heaven) is to be sung as a single syllable no matter how spelt. 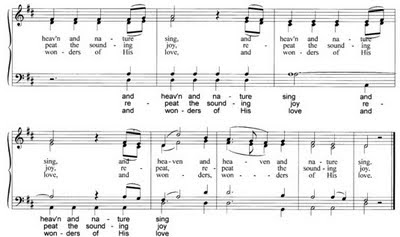 This got me thinking about compression (varisyllabicity) and the constraints on it.
In modern English the word heaven, like seven, given, even, when spoken in isolation and in ordinary slow formal or colloquial style, must have two syllables. Phonemically heaven is /ˈhevən/, with the /ən/ sequence optionally being realized as a syllabic [n]. The cluster /vn/, with ordinary non-syllabic n, is not a permitted final cluster, and if there is no [ə] present then the [n] must be syllabic. (This is not the usage of eighteenth-century hymnodists, for whom “heav’n” could be, and usually was, scanned as one syllable in all contexts.)
However, like other syllabic consonants, this [n̩] is subject to possible loss of syllabicity when followed by a weak vowel. Compare seven and a half pronounced as four syllables only, ˈsevnənəˈhɑːf, or indeed heaven and earth as three, ˈhevnənˈɜːθ.
In heaven and nature sing the /ən/ of heaven is followed each time by the weak /ə/ of and. So the conditions for compression are satisfied, the word can be pronounced as a single syllable, and the notation in the score is justified.
In the recording made by Boney M, interestingly enough, we hear clearly disyllabic ˈhevən each time my score has heav’n, but compressed monosyllabic hevn for the last repetition, where my score says heaven.
Mariah Carey, on the other hand, sings disyllabic ˈhevən everywhere. This may be because she’s American, and the Americans don’t seem to do nearly as much compression as the British. (Compare typical AmE ˈfedərəl federal with typical BrE ˈfedrəl.)
Posted by John Wells at 12:14