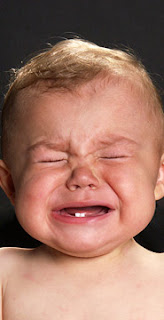 French newborns tended to cry with a rising melody contour, starting at a low pitch and ending on a high note, whereas German babies preferred a falling melody. …
These patterns are consistent with characteristic differences between the two languages, according the researchers.

This was the first I had heard of this claim, and I had not had an opportunity to read the journal article on which it was based. Not surprisingly, my immediate reaction was to rubbish it. After all, both French and German use both rising and falling pitch contours (as does English).
No one would want to dispute that very young children acquire the appropriate suprasegmentals for their native language, including in particular appropriate rhythm and intonation, well before they acquire segmentals (vowels and consonants). It is entirely plausible that this should be detectable even in newborns, and even that French newborns should vocalize differently from German ones.

The problem arises in the claim that French has rises while German has falls. Both have both.

The report duly appeared in today’s Times. It makes the claim in rather greater detail, including reference to loudness.

While the average volume of crying was the same, the French babies started more quietly and built up to a crescendo, while the German babies did the opposite. …

“When you say the word ‘Papa’ in German, for instance, you stress the first syllable, whereas in French it is the other way round,” explained Professor Angela Friederici, of the Max Planck Institute for Human Cognitive and Brain Sciences, Leipzig. The same pattern is typical for longer phrases, she said.

This appears to be plain wrong. According to Mangold’s Duden Aussprachewörterbuch, German Papa is usually stressed on the second syllable, paˈpaː. (That is if it means ‘father’. If it means ‘pope’, it has initial stress. I don’t think German newborns would be concerned with the Pope.)
Posted by John Wells at 11:23