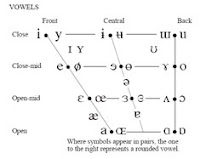 For a long time I've been intrigued by an IPA symbol, reversed e. It apears in the middle of the vowel chart and is described as a close-mid central unrounded vowel. I bought the IPA Handbook hoping I would get a proper explanation of it, but the book simply repeats what I already knew about it. Unfortunately it does not give an example of its use. Can this symbol be used for any English word? Could you give me example?

The symbol ɘ is little used. It is a possible allophone of English ə
(e.g. perhaps in the word “recognize”). It would be a phonetically
more explicit way of writing German ə, as in “bitte”, which is clearly
closer than the corresponding English sound. However, since there is no contrast among short mid central vowels, we normally write ə no matter what the precise vowel height.

I could have gone on to say that in my view the middle of the IPA chart represents an excessive enthusiasm for a non-Jonesian extension of the Cardinal Vowel scheme. In this scheme Daniel Jones first gave us the primary cardinal vowels i e ɛ a ɑ ɔ o u, supplemented by the secondary cardinals y ø œ ɒ ʌ ɤ ɯ. Later the missing one, the open front rounded secondary 4 (c.v. no. 12) was assigned the symbol ɶ, though it is not clear whether there is any use for this symbol in transcribing a real language. (The best candidate for it known to me is the open allophone of Danish /œ/ used next to the Danish uvular r. But no language, as far as I know, distinguishes four front rounded vowel phonemes.)
Considerably later (I speak from memory, since I do not have access to books today) Jones added the two close central vowels to fill the gap between i and u, y and ɯ, namely ɨ and ʉ. Their inclusion is justified by languages such as Russian, which needs the symbol ɨ, and Swedish, which needs ʉ.
But Jones never defined any non-peripheral cardinal vowels. For most languages there is at most one mid central vowel, which can be adequately represented by the schwa symbol, ə, which has always been rather vaguely defined. A few languages have two mid central vowels. German and Danish distinguish a higher/closer ə (as in German bitte ˈbɪtə) from a lower/opener ɐ (as in German bitter ˈbɪtɐ). Non-rhotic English distinguishes a strong long ɜː (as in the noun insert ˈɪnsɜːt) from the weak short ə (as in the noun concert ˈkɒnsət). English and German justify the presence on the chart of two other non-peripheral lax vowel symbols, ɪ and ʊ. Certain other languages (e.g. Dutch) may need the symbol ɵ.
But as far as I can see we don’t need ɘ and we don’t need ɞ. The only reason to include them on the chart is a desire to label every intersection of lines on the chart, rounded and unrounded.
We have never taught the symbols ɘ and ɞ or drilled the corresponding sounds at UCL. I wonder if students have been taught them and drilled on them anywhere else. I suspect not.
Posted by John Wells at 18:03