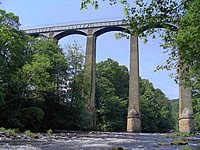 The structure, built by Thomas Telford and William Jessop, is the longest and highest aqueduct in Britain.

Pontcysyllte is such a lovely name that it would be a pity to let the occasion pass without mention.
Wikipedia tells us that its Welsh pronunciation is ˌpɔntkəˈsʌɬtɛ. Myself, though, I would transcribe it ˌpɔntkəˈsəɬtɛ (or more simply as ˌpontkəˈsəɬte). The Welsh schwa is indeed stressable, despite being mid central, and has the same quality in the penultimate syllable of this word as it has in the antepenultimate. There is no reason to use the symbol ʌ in transcribing Welsh itself. The reason some people do is that in Welsh English the equivalent sound is used in STRUT words.

The first part of the name is the Welsh word for ‘bridge’, pont, an obvious Latin borrowing (pons, pont-, hence French pont) dating from the time before the arrival of the Anglo-Saxons in Britain, when the Latin-speaking Roman urban population and legionaries interacted with an indigenous British-speaking (= early Welsh speaking) rural population. (That is why there are several hundred Latin loanwords in Welsh.)
What is the second element? It looks like a local dialect form of cysylltau, plural of cyswllt ˈkəsʊɬt ‘joint, junction’. This is related to the rather more frequently encountered verb cysylltu kəˈsəɬtɨ ‘join, connect’. So perhaps the name means something like ‘junction(s) bridge’.

The nearby village is called Froncysyllte, ‘junction brow’. Somehow it sounds less romantic when turned into English. Bron (when soft-mutated, fron) is the brow of a hill but the breast of a person or animal, hence the name Bronwen ‘white breast’.

The stem of cyswllt, cysylltau, cysylltu, too, is of Latin origin. It can be traced to the Latin word consolidus, which has given us English consolidate.

The aqueduct is only two hundred years old, so did not exist in Roman times. I wonder, though, whether there might have been a Roman bridge nearby, called pons consolida.

[I remember at the oral exam when I did a GCSE in Welsh the first question the examiner asked me was, Beth yw eich cysylltiad chi gyda Chymru? ‘What is your connection with Wales?’, to which I could only answer Dim ond diddordeb ieithyddol ‘just linguistic interest’. Sorry, that’s nothing to do with phonetics, it just relates to cysyllt-.]
Posted by John Wells at 16:33