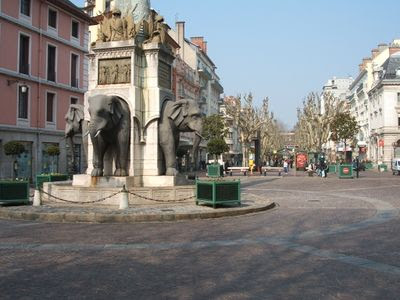 At the moment I am in France for an international conference on English Pronunciation: Issues and Practices, held at the Université de Savoie in Chambéry. Quite apart from everything else, it is good to see so many former students and old friends again.
One of the most interesting presentations I have attended was by José Mompean, who has done a corpus-based study of words with variable pronunciation. Among these words are several for which I did preference polling, as reported in LDOCE. His study was based on BBC correspondents and news presenters, as represented in the sound files available on the BBC website, and involved counting up the number of times a word was said this way or that.
Most of his statistics agree reasonably well with mine. Where they don’t, this can be readily understood given that he is looking at the performance of people from a very specific professional background, while I was looking at the opinions of people of various social backgrounds from all over Britain.
For example, my 2008 polling figures for the word poor were pʊə 26%, pɔː 74%. Mompean’s are pʊə 32%, pɔː 68%. Allowing for sampling error, these are virtually identical.
For stress placement in the word controversy, on the other hand, my 2008 survey had initial stress ˈkɒn- 40%, second syllable stress -ˈtrɒv- 60%; Mompean found initial ˈkɒn- 73%, second syllable -ˈtrɒv- 27%. The explanation for this discrepancy may be that BBC announcers have been explicitly trained or encouraged to use initial stress in this word, whereas the general public are under no such pressure.
Posted by John Wells at 17:13