Yesterday on BBC TV’s hymn-singing programme Songs of Praise one of the guest artistes was the distinguished opera singer Bryn Terfel. I nearly fell off my seat on hearing the presenter pronounce his name correctly, i.e. as he would himself. Then I realized the reason: the presenter was not some Englishman but Aled Jones, who is also, like Bryn himself, a native speaker of Welsh.
The non-Welsh find it difficult to get their heads around the idea that in Welsh spelling the letter f stands for v, not for f (despite the model of English of). So the singer’s surname is properly ˈtɛrvɛl. But most people think it must be ˈtɜːfl.
We see the same thing in the name Dafydd, the Welsh for ‘David’. In Welsh it is ˈdavɪð. By some further confusion the English often spell it wrong, too, as Daffyd, which fits better with the mispronunciation ˈdæfɪd.
The singer’s first name, Bryn, is fine as brɪn. Strictly speaking, though, in the northern variety of Welsh which he and Aled speak this is a central rather than a front vowel: it is a short lax ɨ rather than a short lax i. Ideally we could represent it as ᵻ, although this symbol is not recognized by the IPA. The Wikipedia page on Welsh phonology writes it ɨ̞. 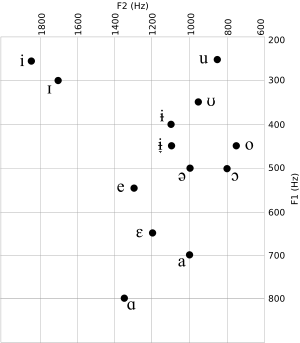 Here is the vowel formant chart from the Wikipedia article, attributed to Martin Ball’s article ‘Phonetics for phonology’ in Welsh Phonology: Selected Readings, ed. M. J. Ball and G. E. Jones, Cardiff, U. of Wales Press, 1984. You will notice that the placement of ɑ (the long open vowel, as in tad ‘father’) looks wildly out of line. I checked the original 1984 article, and I find that it does not contain this diagram although it does give the formant values on which it is based. I can only suppose that the values given for ɑ — 800 Hz for F1 and 1350 Hz for F2, both much higher than one would expect — may be wrong.
Posted by John Wells at 11:31