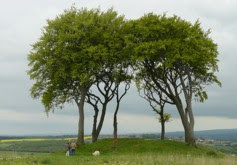 It is thought that the first constituency to declare its result after the polls close in the UK General Election this Thursday evening will probably be that of Houghton and Sunderland South. This poses a nice test for the radio and TV announcers.
Should they call it ˈhɔːtn̩, ˈhaʊtn̩ or ˈhəʊtn̩? THOUGHT, MOUTH or GOAT? Our pronunciation dictionaries give all three possibilities for places with this spelling.
It’s the rest of the constituency’s name that resolves the matter. The town southwest of Sunderland in Tyne & Wear is known more fully as Houghton-le-Spring. All our pronunciation dictionaries tell us that that particular Houghton is ˈhəʊtn̩. (People do however speak with a northeastern accent there — “Mackem” rather than straight Geordie — so their local GOAT vowel could be anything from [ʊɔ] to [ɵː]. I’m not an expert.)
The picture at the top shows the Seven Sisters at Houghton-le-Spring (don’t ask). Photo: GeordieMac Pics.

Places in other counties of England may differ. Graham Pointon’s BBC Pronouncing Dictionary of British Names (OUP, 1990) gives us a long list. 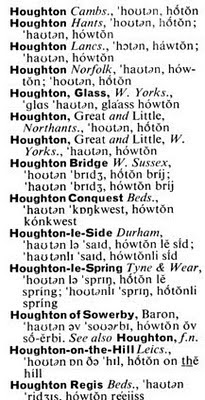 But this list, long though it may be, doesn’t help us with places of that name in Australia, New Zealand, South Africa or Canada. Nor does it help with United States placenames. There, according to EPD, Houghton MI is ˈhoʊtn̩, like the one near Sunderland. But Houghton WA, according to Wikipedia, is ˈhaʊtn̩.

On the M61 motorway in Lancashire there is a directional sign pointing to “Westh’ton”. Not all road users would know that this is short for Westhoughton, which is pronounced westˈhɔːtn̩.
Posted by John Wells at 07:59