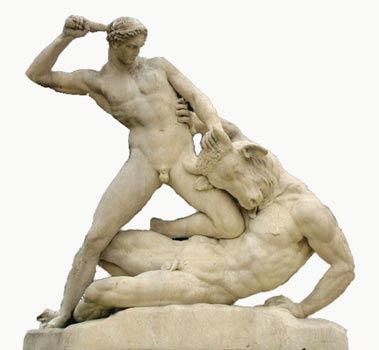 You remember the man who took his torn trousers to the Greek tailor? The tailor asked, Euripides? Yes, said the man, Eumenides?

Every now and again the Guardian letters column sports a series of punning contributions on some particular theme. Just at the moment the theme is Greek.

For pitta’s sake! Have we not been punnist enough by all these ill-bread Guardian readers ouzo lack a sense of houmous?

I can’t understand the calls for an end to the Greek letters. We know the Guardian enjoys themed correspondence. Sparta the letters page ethos.

I hope you Argoing to stop these Greek letters. Some take a minotaur so to understand. Others made me feel so Iliad to stop reading.

This last one doesn’t work for those of us who pronounce ˈmaɪnətɔː rather than ˈmɪnətɔː — which means it doesn’t work for most Brits, or at least most British classicists. I imagine Americans, though, will twig minute or with no hesitation.

Here’s Saturday’s effort. As always, you do have to know how the relevant names from Greek mythology and history are pronounced in English.

There are Menelaus of subtlety to Dis Greek correspondence. Please maintain it or Alcibiades newspaper no more.

Alcibiades is ˌælsɪˈbaɪədiːz, and I think you have to be generous to interpret it as I sh’ll buy this (?).

In other news, the Faculty of Classics at the University of Cambridge has egg on its face because the Greek inscription on the glass doors of its new building is misspelt: it has a Latin S instead of a Greek sigma Σ.