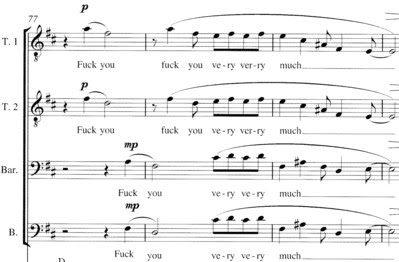 I’ve never been one to utter what in English are quaintly known as four-letter words. My parents never swore, my brothers don’t swear, my partner doesn’t swear. My colleagues at work didn’t, most of my friends don’t.
Not using a word oneself doesn’t necessarily mean not being familiar with it in the mouths of others. I still remember my surprise at boarding school in the south of England when, having grown up in the north (but in an RP-speaking family), I first heard a southerner say fʌk. Till then I’d supposed the word to be fʊk, as pronounced by northerners with no FOOT-STRUT split.

The theme for our choir’s summer concert this year is the Seven Deadly Sins.

One of the songs we’re due to present is a Lily Allen number, with which those of you who have lived a less sheltered life than I have may already be familiar. Unfortunately because of other commitments I shan’t be able to take part in our performances on this occasion, so I shall be spared the dilemma of wondering whether I can bring myself to sing in public what I would not say even in private.
Posted by John Wells at 08:28