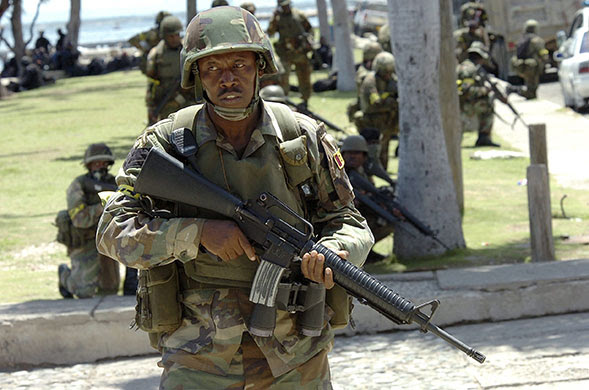 The disturbing news of urban warfare in progress in Kingston, Jamaica, has led me to have a look at the website of the venerable local newspaper, the Gleaner. I hope it is not insensitive in the middle of such tragic events for me to comment on matters of language.
The news report is written in standard English, the regular language of educated and official discourse in the island. This poses the question: how best can the paper record the words spoken in Jamaican Creole, the words actually uttered by witnesses and bystanders? Particularly in its most extreme (basilectal) form, JC can be very distant from standard English. The JC orthography devised by academics, now being trialled in literacy projects (blog, 13 August 2008), is still very unfamiliar to most Jamaicans. Instead, the Gleaner uses standard English spelling where possible, and ‘phonetic’ representations based on ordinary spelling conventions where not.

“A nuff shot dem a fire and all bomb a drop from helicopter,” said one caller to our news centre.

The Gleaner’s local readers will be able to interpret this as meaning “there’s a lot of gunfire going on, and they’re even dropping bombs from helicopters.” A word-for-word gloss would be “is plentiful shot they PROG fire and even bomb PROG drop from helicopter” (where PROG means the particle denoting the progressive aspect of the verb, English be …-ing).
In the JC orthography devised by Cassidy & Le Page and used in the Dictionary of Jamaican English and the literacy project, this would be spelt (or transcribed) a nof shat dem a faia and aal bam a drap fram helikapta. 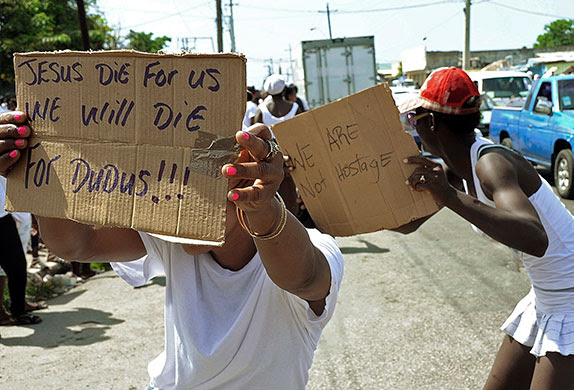 “Me hear say me daughter-in-law dead and all people house bomb down. Dem a go kill we off in yah and decent people live yah,” another woman said, in tears.

That is, “I’ve been told that my daughter-in-law is dead and that people’s houses have even been destroyed by bombs. They are going to kill us all here, and there are decent people living here.” (“PRON1sg hear COMPLEMENTIZER PRON1sg daughter-in-law dead … PRON3pl PROG go kill PRON1pl completely in here …”) mi hier se mi daata-in-laa ded an aal piipl hous bam doun. dem a go kil wi aaf in ya an diisn piipl liv ya.

“A true me neva have nowhere fi come out go. Me ’fraid, me ’fraid, me ’fraid,” added the woman as she held her phone close to the window to allow the news team to listen to the explosions.
"Where is the prime minister? Him is we member of parliament and now that them a kill we, him not here. When them want votes, them come down here come party, but now that the police dem a kill we, nobody not here.”

The woman’s question is couched in standard English. The JC equivalent would be A-weh the prime minister deh? a we di praiminista de?
The other news from Jamaica this week has been the launch of the audio version of the Bible in JC (aka Patois). This audio clip includes some short passages.
Posted by John Wells at 08:56